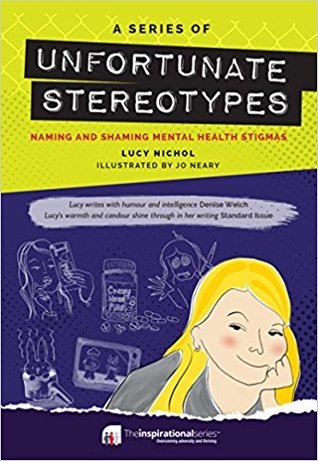 This book is also available on audible, you can get a free trial by clicking the image below.

‘Lucy’s book really struck a chord with me. Anxiety is a medium-sized word with plus-size consequences, and opening up about what it actually means is the only way to break down those ‘unfortunate stereotypes’…’ Andrea McLean

‘I love Lucy’s writing. It’s an insightful and incredibly accurate account of living with mental illness and the stigma that surrounds it, written with humour and intelligence.’ Denise Welch

From a young age, Lucy Nichol has always been on edge. Whether it’s because of her fear of beards, a general sense that she can catch a disease from anything, or the belief that she’s going to throw up at any given moment, she’s never really felt safe.

In A Series of Unfortunate Stereotypes, Lucy explores the different lenses through which she – and other people – have viewed her mental health problems. She tackles a number of different stereotypes placed on people living with mental illness, including the idea that they are narcissists, hypochondriacs, and psychos.

After writing a blog post about her journey, Lucy realised that she wasn’t alone in feeling this way. And so she began to talk more about her experience, eventually becoming a columnist in Sarah Millican’s magazine Standard Issue. In writing about her life in such an open way, Lucy has been able to claw herself back from the grips of her anxiety.

A Series of Unfortunate Stereotypes is one of the most fortunate things you could read!