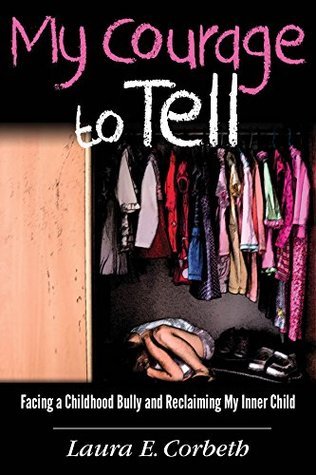 It was more than sibling rivalry.
“This is a story about hope, resilience and strength for anyone experiencing psychological abuse.

Laura really does something incredible with this book. She finds the strength and courage to tell a story about abuse – a story that will be all too familiar for millions of men and women – a story that often never gets told. She shines a spotlight on an area that demands our attention. Her brave account of suffering psychological abuse at the hands of an older brother, under the watchful eyes of her mother, is heartbreaking, riveting and empowering. It is a story that needs to be told.”

*************
My Courage to Tell
My Courage to Tell is the story of one woman’s struggle to overcome a childhood of abuse at the hands of her cruel, bullying brother. Memories of this abuse remain deeply buried until an Aunt dies in Manhattan, leaving an estate Laura Corbeth must settle with her estranged brother. As she tries to administer the estate, Laura is plagued by symptoms of post-traumatic stress. Suppressed memories start to rise to the surface.

************
“Psychological and emotional abuse (terms I use interchangeably) are often misunderstood, minimized, or ignored. Over the past decade alone, there have been substantial advances with respect to identifying, preventing and treating those who have suffered sexual and physical abuse; however, there has much less attention to identifying and addressing psychological abuse.

My Courage to Tell makes the invisible visible. Reading Laura’s account of healing and recovery is inspirational and is an outstanding contribution to the literature on psychological abuse in families. Her willingness to confront and share the scary and painful reality of her childhood and detail how various treatment interventions allowed her to work through distressing memories, emotions, and beliefs will pave the way for others who recognize themselves in Laura’s story.