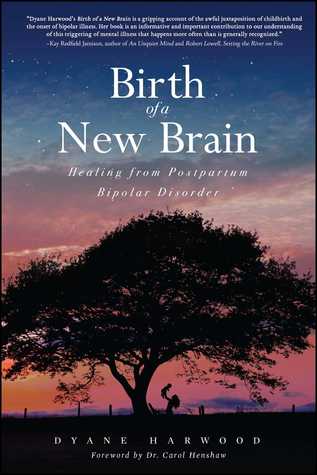 After the birth of her baby triggers a manic maelstrom, Dyane Harwood struggles to survive the bewildering highs and crippling lows of her brain’s turmoil. Birth of a New Brain vividly depicts her postpartum bipolar disorder, an unusual type of bipolar disorder and postpartum mood and anxiety disorder.

During her childhood, Harwood grew up close to her father, a brilliant violinist in the Los Angeles Philharmonic who had bipolar disorder. She learned how bipolar disorder could ravage a family, but she never suspected that she’d become mentally ill—until her baby was born.

Harwood wondered if mental health would always be out of her reach. From medications to electroconvulsive therapy, from “redwood forest baths” to bibliotherapy, she explored both traditional and unconventional methods of recovery—in-between harrowing psychiatric hospitalizations.

Harwood reveals how she ultimately achieved a stable mood. She discovered that despite having a chronic mood disorder, a new, richer life is possible. Birth of a New Brain is the chronicle of one mother’s perseverance, offering hope and grounded advice for those battling mental illness.